Simulating with Retimers for PCIe® 5.0

The design solution space for high-speed serial links is becoming increasingly complex as data rates climb, channel topologies become more diverse, and tuning parameters for active components multiply. PCI Express® (PCIe®) 5.0, at 32 GT/s, is a particularly relevant example of an application whose design solution space can be a daunting problem to tackle given the low-cost nature of its end-equipment. This paper is intended to help system designers navigate through these design challenges by providing a how-to guide for defining, executing, and analyzing system-level simulations including PCIe® 5.0 Root Complex (RC), Retimer, and End Point (EP).

The scope of this analysis includes:

The approach is based on IBIS Algorithmic Modeling Interface (IBIS-AMI) simulations. IBIS-AMI’s standardized interface offers interoperability between models provided by different integrated circuit (IC) vendors. More importantly, critical component-level impairments such as jitter, bandwidth, and equalization adaptation consistency can be represented in IBIS-AMI models and reflected in the overall link performance—effects that a simple s-parameter analysis of the passive interconnect fails to capture.

For the purposes of this paper, models of a worst-case PCIe transmitter and receiver are used for the RC and EP. A Retimer is used between the RC and EP to achieve a channel reach extension. Its placement is extensively studied, and the overall system performance is investigated using time-domain simulation with IBIS-AMI device models. The methodology outlined here can be extended to any RC, Retimer, and EP device; and it can be performed with any Channel Simulator.

In the context of PCI Express, a Retimer is a physical-layer-protocol-aware, software-transparent extension device that forms two separate electrical Link Segments: RC to Retimer, and Retimer to EP. In addition to clock and data recovery, a Retimer must participate in the Link equalization protocol whereby each transmitter—RC, Retimer, and EP—is automatically optimized for the benefit of the Link partner receiver. A block diagram of a typical Retimer is shown in Figure 1.

A how-to guide is presented to help system engineers approach the PCIe 5.0 and CXL system design challenge in a methodical and bounded manner.

The proposed steps include:

The purpose of this analysis is to be more instructional than theoretical, leaving the reader with a concrete set of steps that can be applied whenever they are faced with a similar design challenge involving RC, Retimer, EP, and PCB material co-optimization.

Step 1: Determine if a Retimer is Required

Before evaluating an RC + Retimer + EP Link, you must first understand whether a Retimer is required for the Link. There are typically two ways of reaching this conclusion:

In this analysis we consider a two-connector PCIe topology which is common in server, storage, and accelerator systems (Figure 2).

For such a topology, the main challenge at 32 GT/s is meeting the system board loss budget (16 dB at 16 GHz) for a 12-inch baseboard channel plus riser card. For the first topology analyzed in this paper, an ultra-low-loss PCB material such as Megtron-6 (~1 dB/inch at 16 GHz) is used for this topology to reduce the baseboard loss as much as possible, as shown in Figure 3.

Although such systems typically operate at nominal temperature (~25 C) and humidity (45-55%), it is important to examine the channel characteristics at extreme conditions such as high temperature (80 C), high humidity (>75%), and worst-case PCB trace manufacturing tolerance leading to differential pair impedance deviation (85 Ω + 10% = 93 Ω). Under these circumstances, the insertion loss degrades to ~1.11 dB/inch at 16 GHz. The channel s-parameters for this topology across different operating conditions are shown in Figure 4 below. 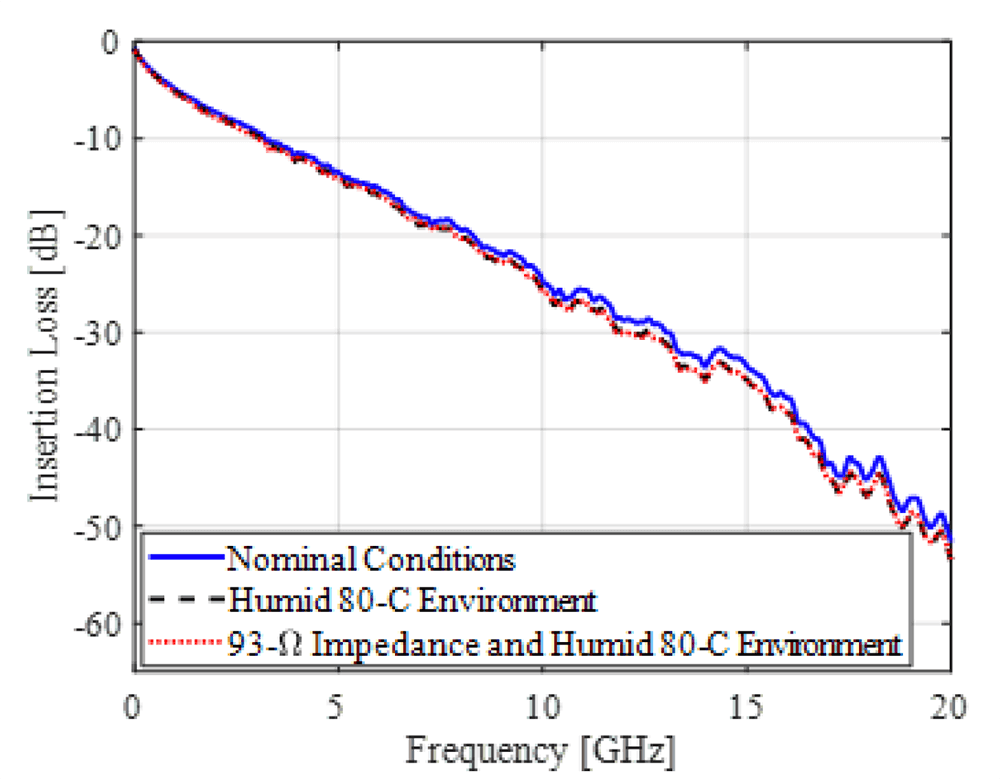 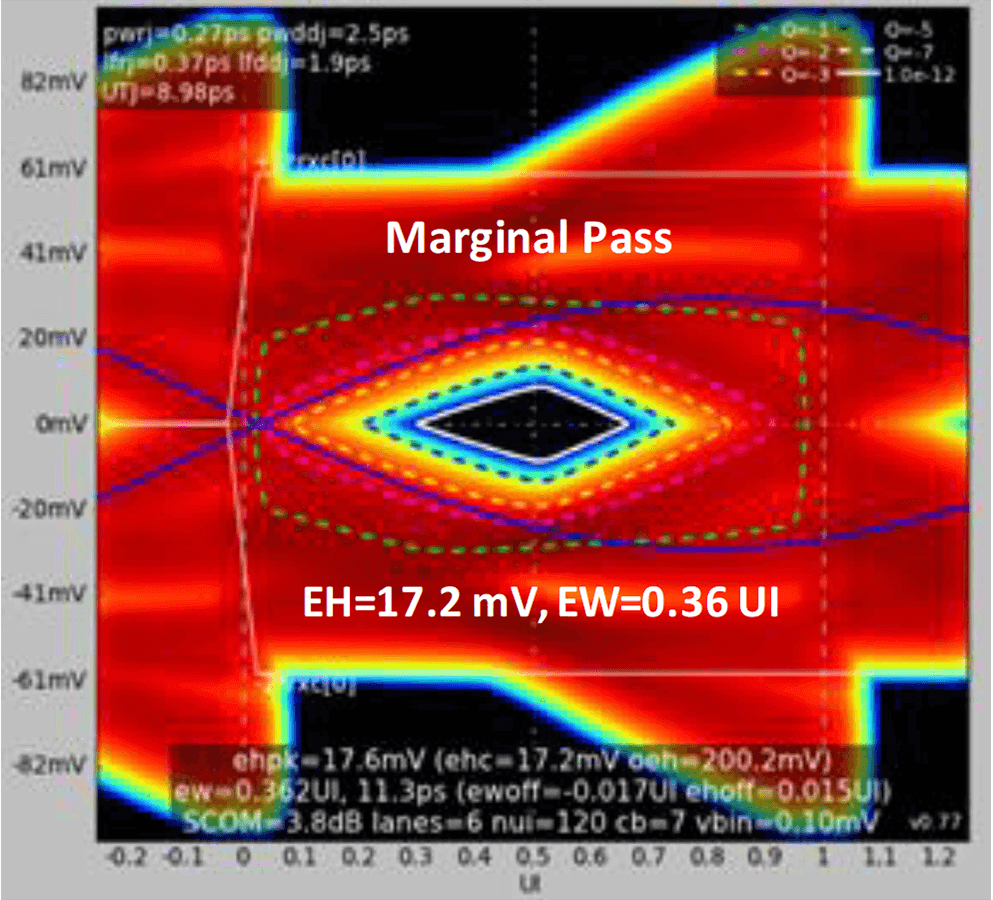 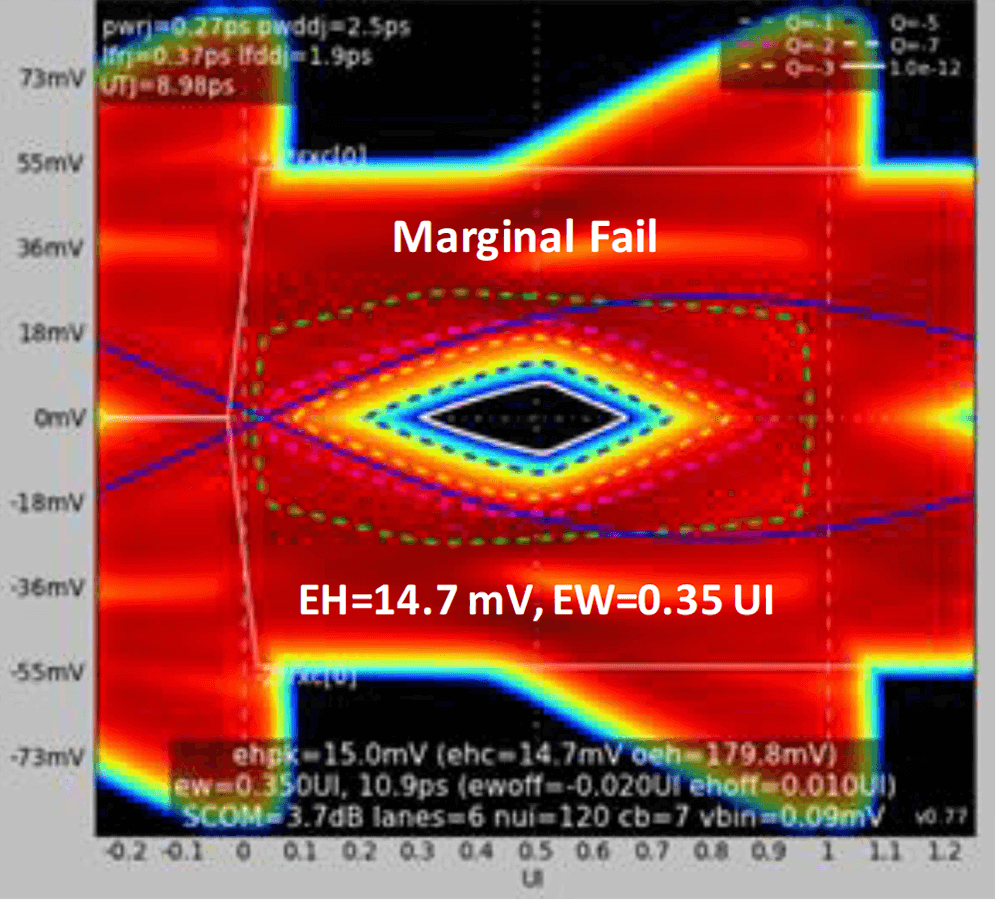 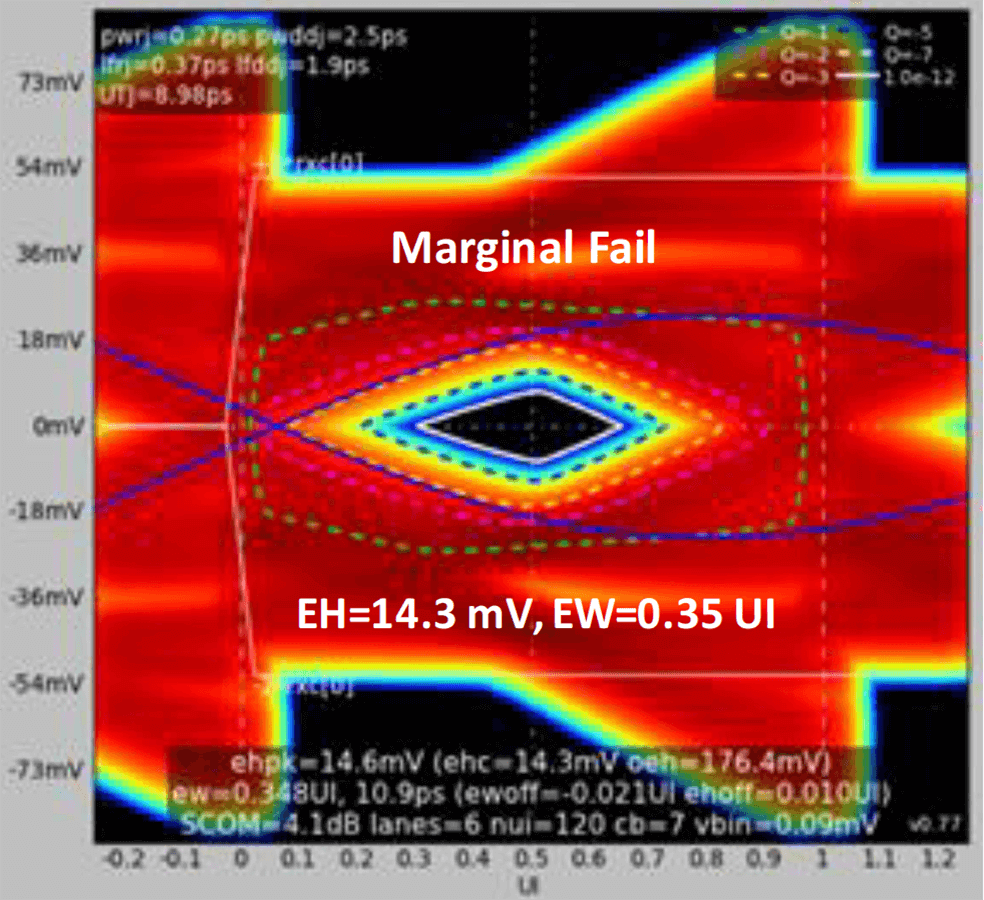 IBIS-AMI channel simulations performed in bit-by-bit mode, which is analogous to time domain simulations, with a reference transmitter and reference receiver model also yields a post-equalized eye that does not meet the minimum eye dimensions of criterion 2. Figure 6 shows the testbench used for this simulation.

Three sets of IBIS-AMI simulations are performed to further validate the initial finding that a Retimer is needed for this channel topology (refer to Figure 4 for insertion loss plots). The simulation results are summarized in Table 2.

Given that the channel in Topology 1 fails both channel evaluation criteria, a second topology is considered in which a Retimer is added on the Riser Card, as shown in Figure 7. Adding a Retimer segments the channel into two independent halves, making it much easier to meet the PCIe channel specifications on each half.

Taking into account additional Retimer breakout routing and considering the worst-case conditions—high temperature, high humidity, and 93-Ω impedance due to manufacturing tolerance—the insertion loss for the two channel segments in Topology 2 are shown in Figure 8. 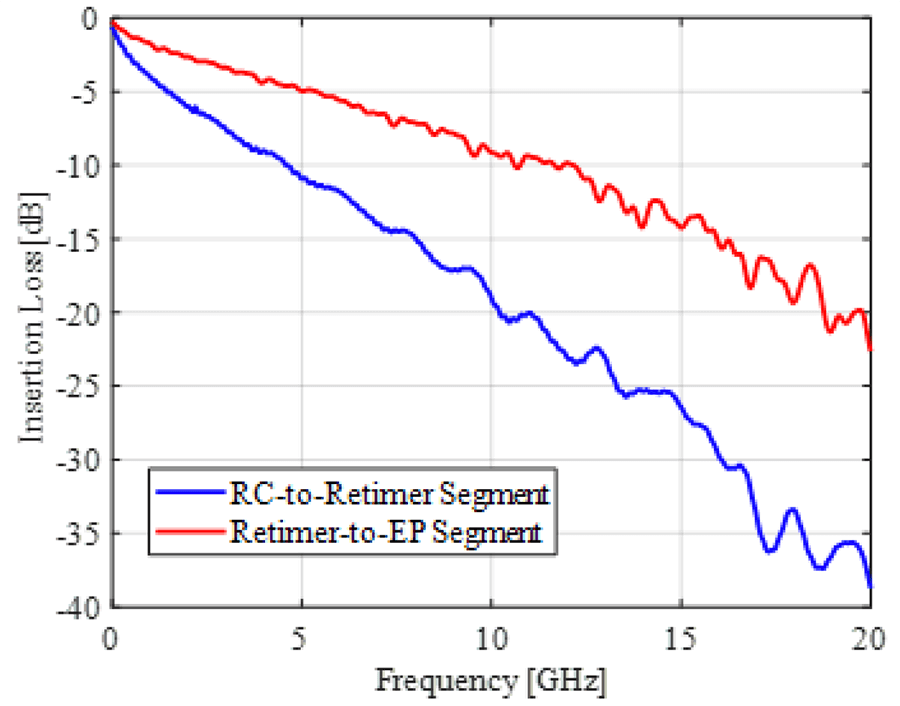 With considerably lower insertion loss, the SeaSim analysis shows there is ample margin for both Link segments, as shown in Figure 9. 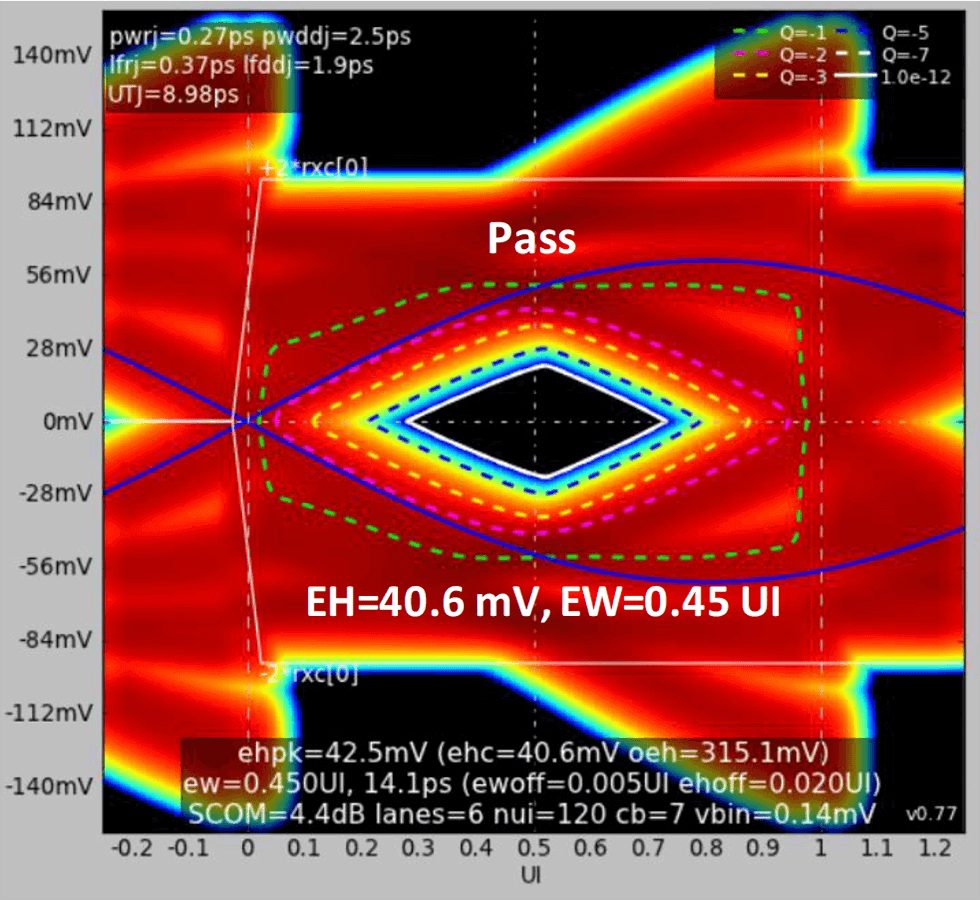 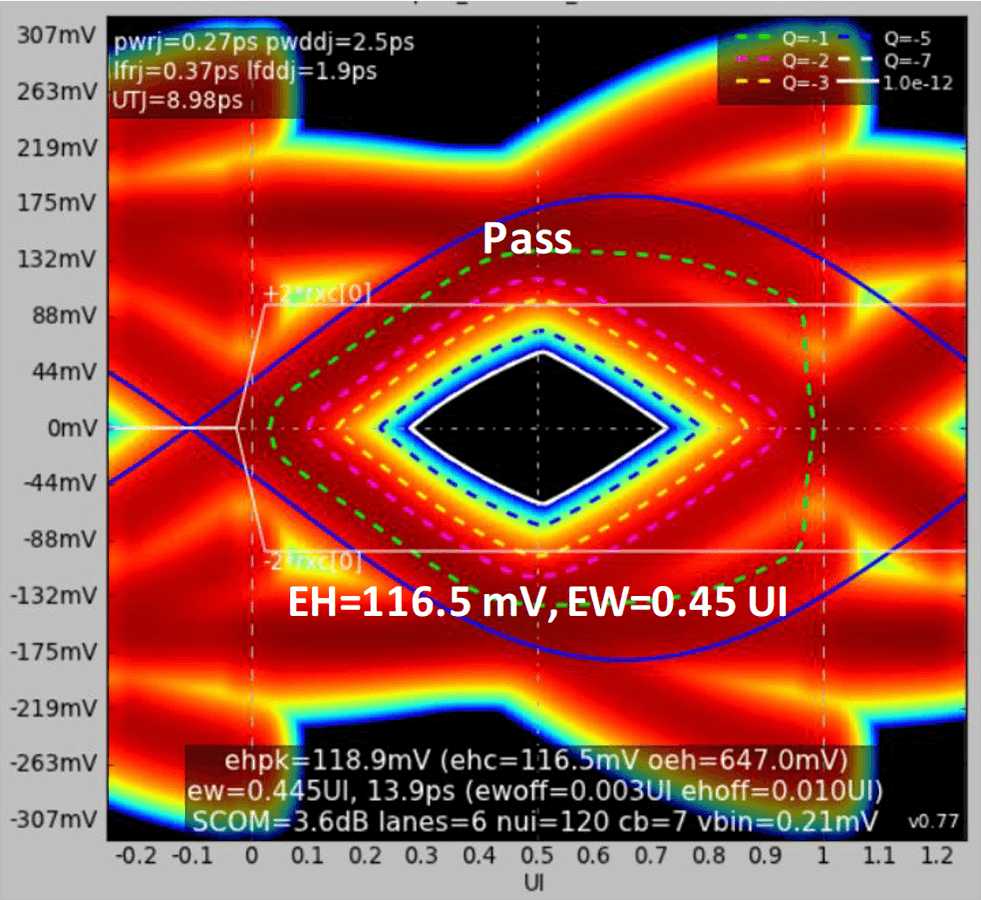 Space permitting, instead of the Riser Card, a Retimer can also be placed on the Baseboard as it is shown in Figure 10. With such a Retimer placement, the margins for each channel segment are relatively large compared to the “without Retimer” case. At this point, system designers can consider using higher loss PCB material to reduce the cost of the system. A lower cost material such as Megtron-4 will have ~1.9 dB/inch at 16 GHz under worst-case conditions and result in a 40-50% cost reduction in the baseboard.

Considering the worst-case conditions, the insertion loss for the two channel segments in Topology 3 are shown in Figure 11. 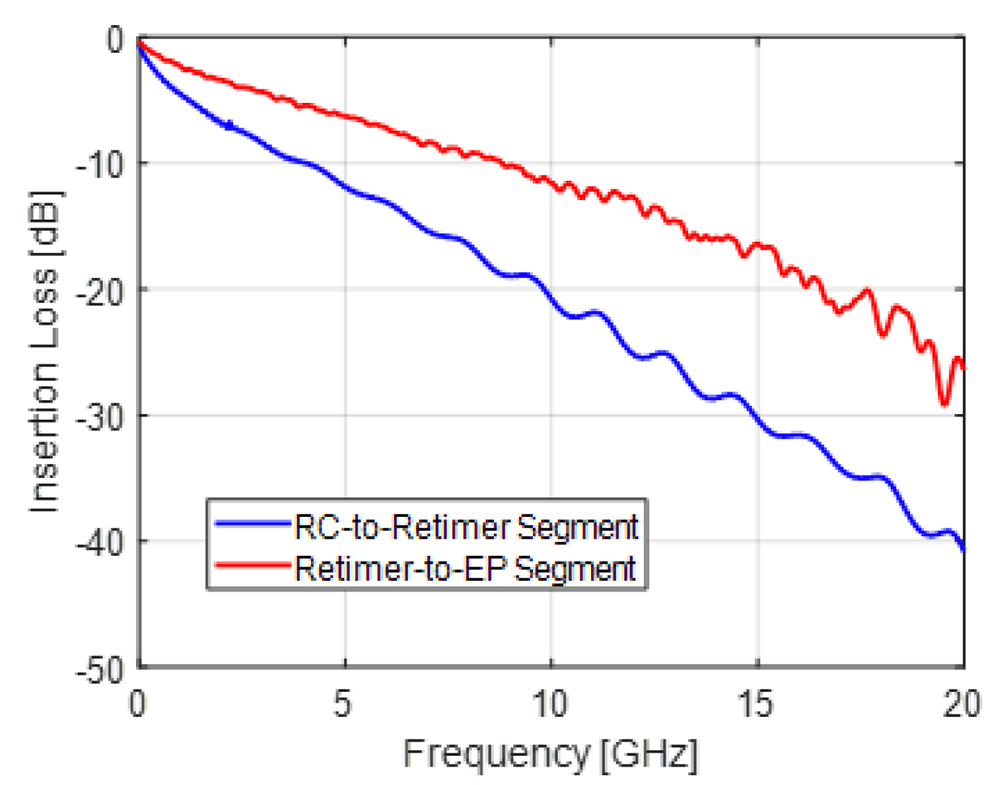 Despite higher loss per inch on the baseboard with the lower cost PCB material, there is still a considerable margin for both Link segments, as shown in Figure 12. 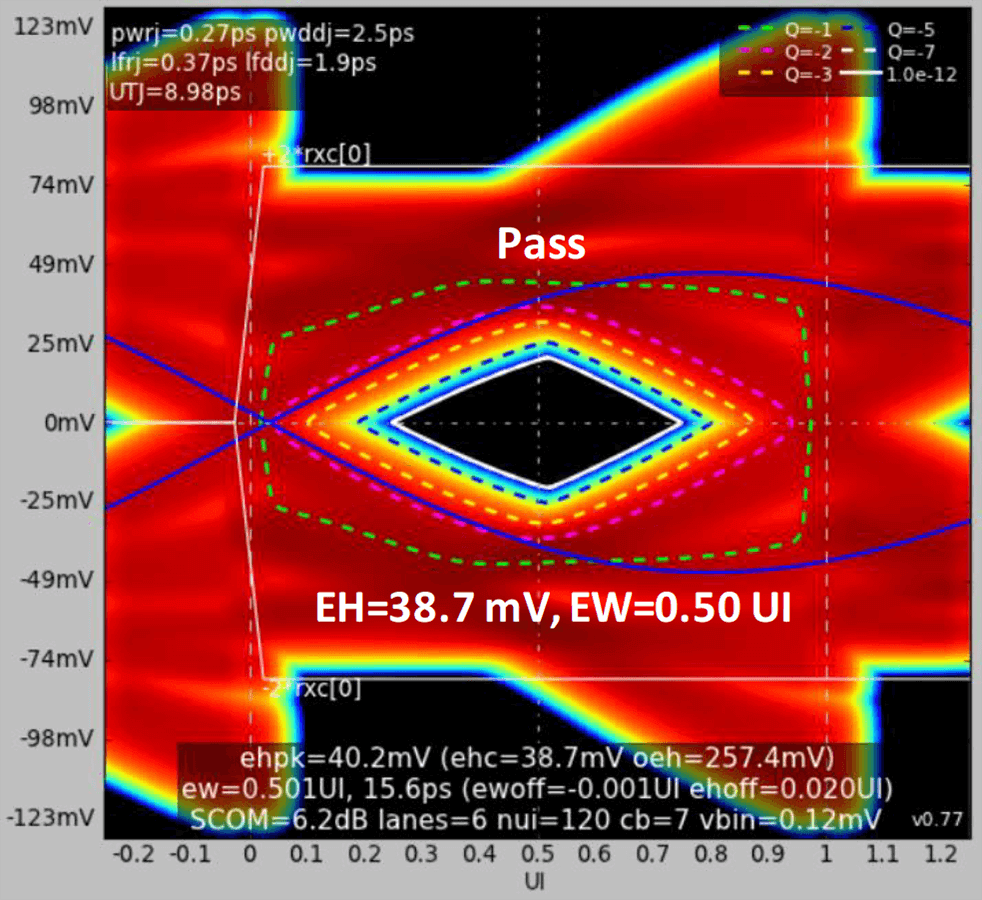 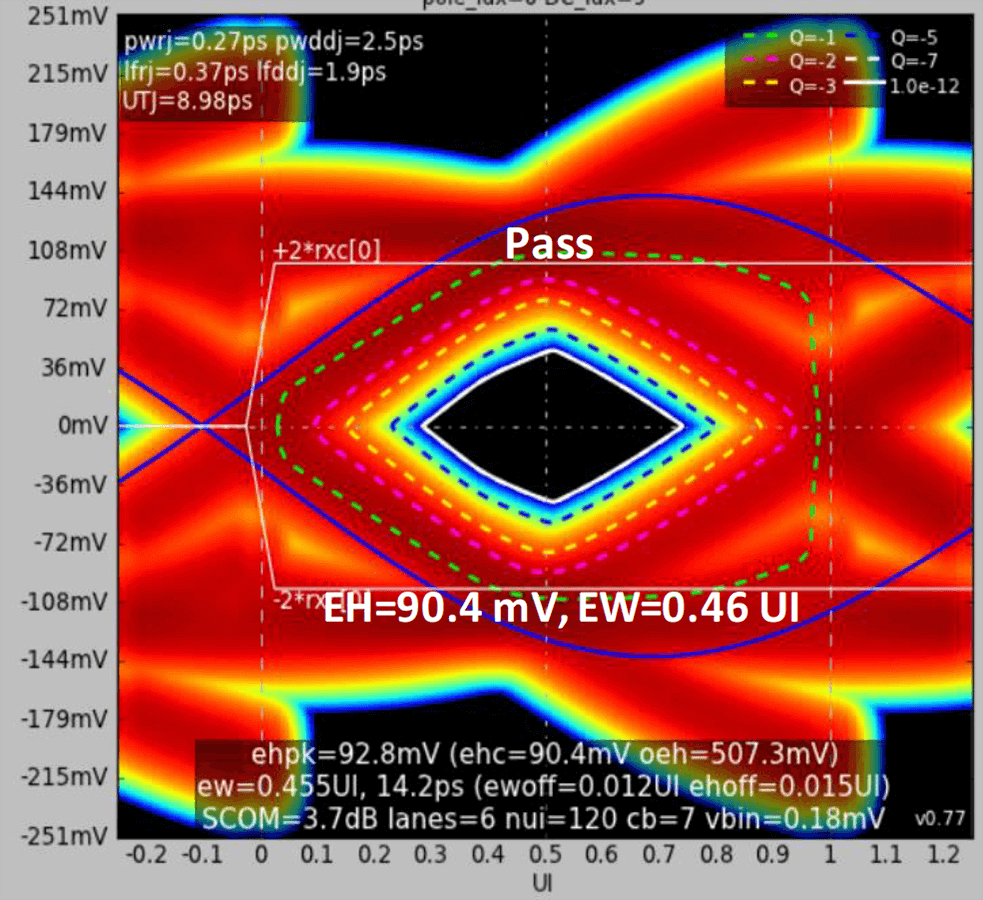 The high-level simulation parameters used in all IBIS-AMI simulations presented in this work are shown in Table 3.

To achieve meaningful results in a reasonable timeframe, a narrow simulation space is chosen, as shown in Table 4. The approach used for selecting the simulation space is covered in a prior work [3], and the basic idea is to test multiple transmitter Preset settings as a means of gauging how robust the Link performance is. If a channel can pass for multiple Preset settings, this is a good indicator of healthy margin compared to a case where only one Preset works.

Transmitter Presets are pre-defined combinations of pre-shoot (pre-cursor equalization) and de-emphasis (post-cursor equalization). Table 5 shows the list of Preset settings considered in this analysis. It is worth noting that the every PCIe transmitter may implement slightly different pre-shoot and de-emphasis values for the ten defined presets, however the PCIe standard does define tolerances for these values with which every PCIe transmitter must comply.

Keysight Advanced Design System (ADS) is the tool used to execute the IBIS-AMI simulations, measure the extrapolated EH and EW, and plot the post-equalized eye opening. For Topologies 2 and 3, two separate testbenches—RC to Retimer and Retimer to EP—are used to simulate the two separate Link segments, as shown in Figure 13 and Figure 14 below. 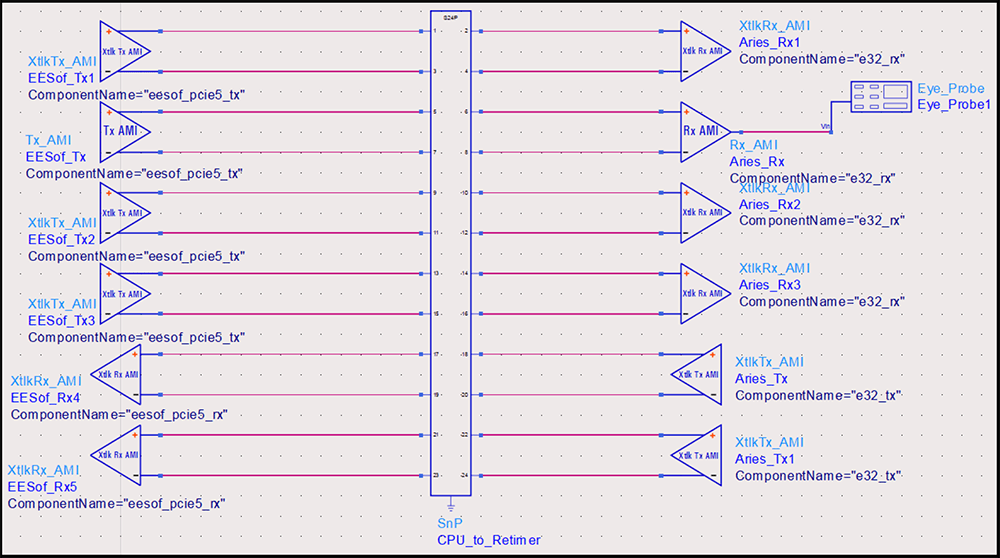 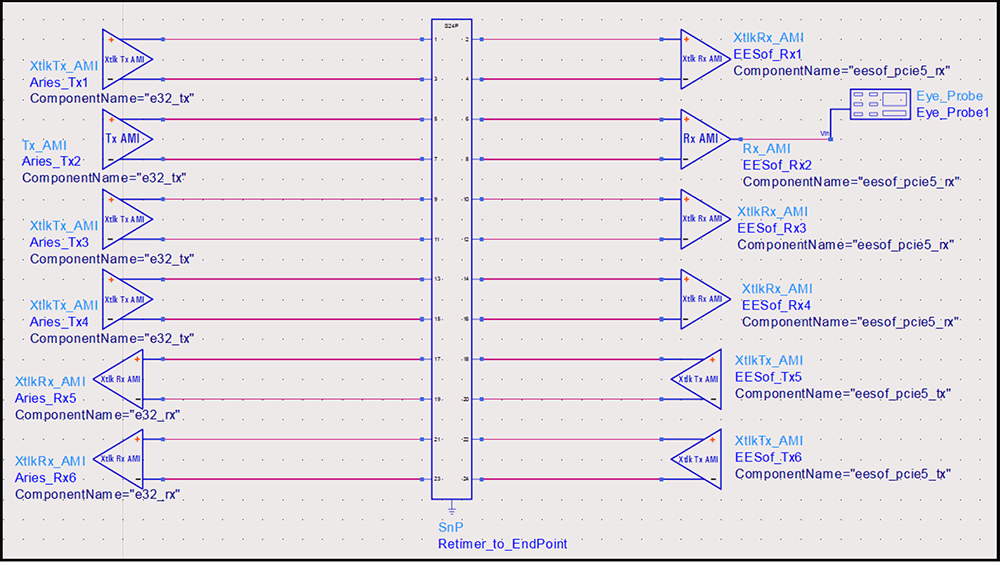 This analysis uses similar pass/fail criteria to that which was used in a prior work [3]. The criteria consist of two rules:

Criterion 1 establishes that the there is a viable set of settings which will result in the desired BER. The specific EH and EW required by the receiver is implementation-dependent. For example, the Astera Labs receiver model requirements for post-equalized EH and EW are shown in Table 6. Criterion 2 ensures that the link has adequate margin and is not overly-sensitive to the Tx Preset setting.

Step 4: Execute the Simulation Matrix and Analyze the Results 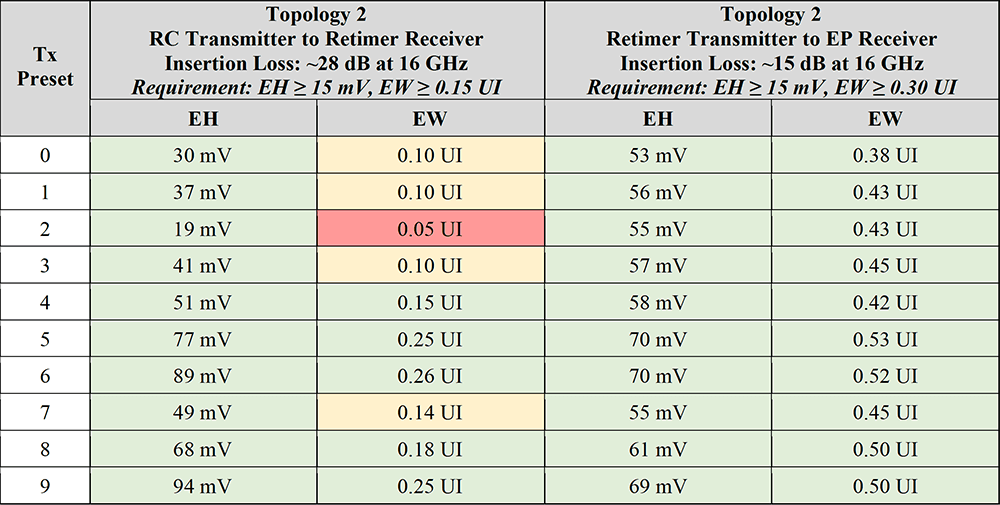 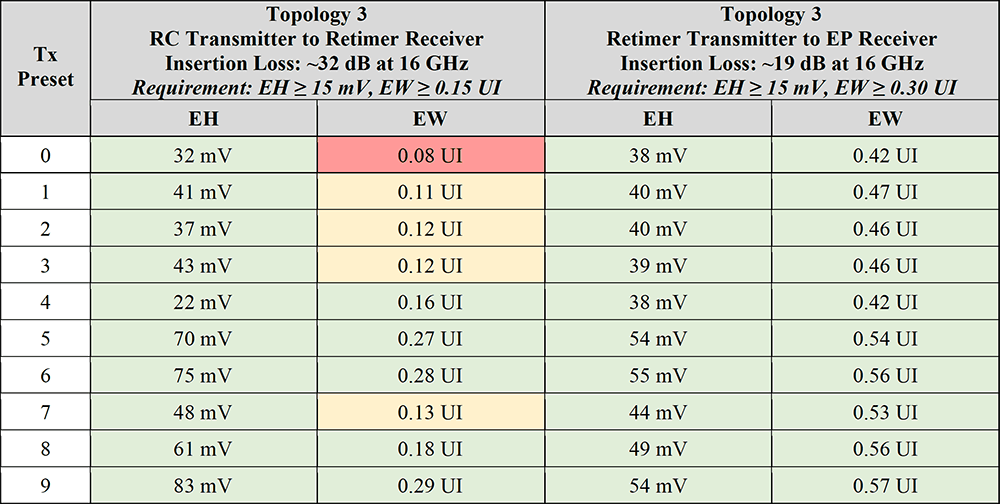 A detailed data display of the pre-equalized channel pulse response and post-equalized eye contour are shown in Figure 15 and Figure 16 for Topology 2 and Topology 3, respectively.

This analysis shows that a channel topology which is common to PCIe 5.0 and CXL-based, at 32GT/s, server designs—baseboard plus riser card plus add-in card—may exceed the PCIe channel specifications and also the capabilities of a generic transmitter/receiver pair. By segmenting this channel topology into two with the use of a protocol-aware Retimer, simulations demonstrate that a more rigorous pass/fail criterion—achieving adequate eye height and width across at least half of all transmitter preset settings—can be met.

In fact, this analysis shows there is enough margin to allow for less expensive PCB material to be used, potentially reducing the total cost of the system substantially while still achieving robust performance on both link segments. This methodology of (1) determining if a Retimer is required, (2) defining a simulation space, (3) defining the evaluation criteria, and (4) executing the simulation matrix can be applied to a wide varied of PCIe 5.0 and CXL applications to help assess system performance and cost tradeoffs.

Casey Morrison is the head of Product and Applications Engineering at Astera Labs and is responsible for defining, validating, and helping customers design-in Astera Labs’ semiconductor products and plug-and-play systems. With 12+ years of experience in high-speed interfaces for data center and wired/wireless communications systems, he has a passion for creating chips and systems which help to enable state-of-the-art compute and networking topologies.

Pegah Alavi is a Senior Applications Engineer at Keysight Technologies, where she focuses on Signal Integrity and High Speed Digital Systems and Applications. Prior to joining Keysight Technologies, Pegah worked on system level modeling of analog and mixed signal circuits in order to best predict the overall systems performance and accurately represent each component.