Aries Smart Retimers are purpose-built 100% in the cloud and for the cloud, offering extensive fleet management capabilities and tested for robust, seamless interoperation in our Cloud-Scale Interop Lab. As the #1 choice for CPU / GPU vendors and cloud operators, Aries is the industry’s most widely-deployed and field-tested PCIe / CXL Retimer portfolio. 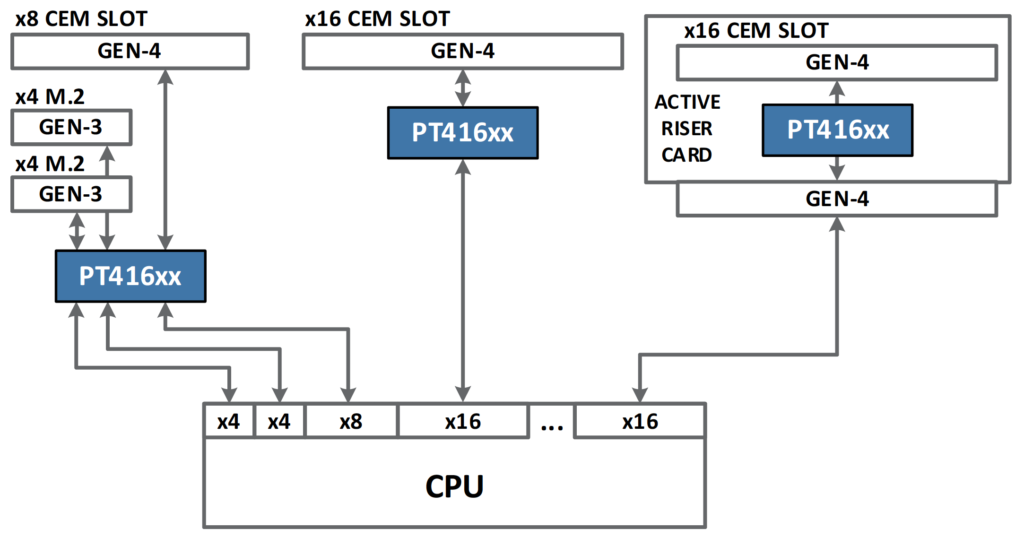 You may also order from our distributors >

Why Use Aries Smart Retimers?

System Visibility: The Retimers unique position in the middle of the Link means diagnostic tools can help identify system-level issues before they affect customers

The Difference is Clear

Aries Smart Retimers are a cost-efficient solution to doubling both bandwidth and reach for complex topologies while maintaining low latency. 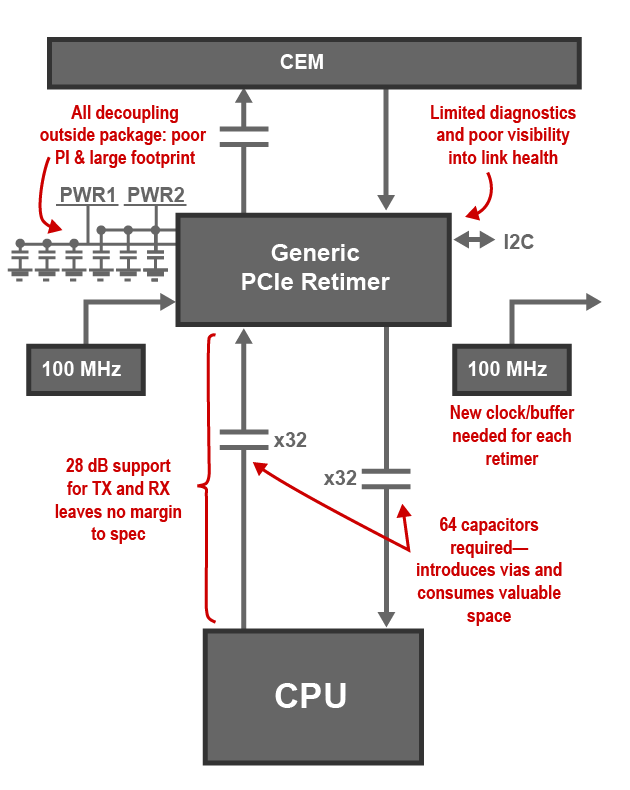 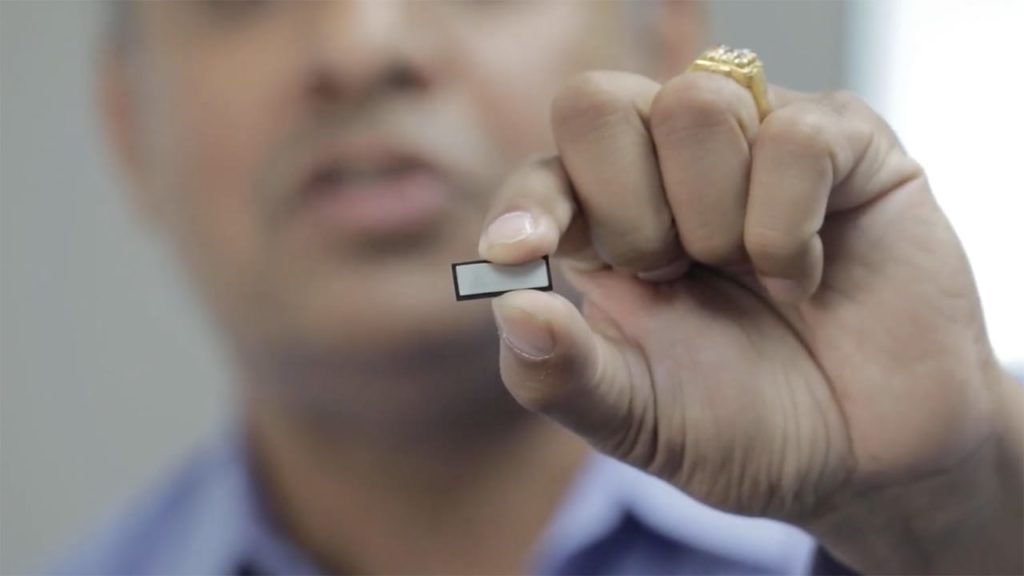 In this demonstration Casey showcases the Aries PCIe® Smart Retimer in a PCIe 4.0 SSD application. 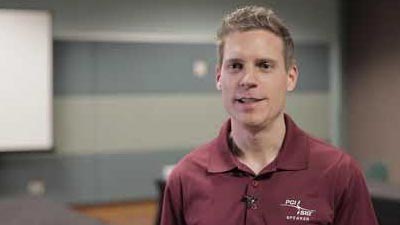 Quick tutorial on PCIe® Retimers — What do they do? When to use a retimer? What key features to look for? PCI-SIG compliance requirements and more!

What are the benefits of Aries PCIe Smart Retimers compared to general-purpose retimers?

How to determine if a retimer is required?

There are generally three ways to approach this:

What are the differences between Retimers and Redrivers?

A redriver amplifies a signal, whereas a retimer retransmits a fresh copy of the signal.

Get a Detailed Comparison >

How much dB can a Retimer support?

How to fine tune a Retimer EQ setting?

There is no need to fine tune a retimer EQ setting as it participates in Link Equalization with Root Complex and End Points and automatically fine tunes the receiver EQ.

What is the maximum number of cascaded Retimers allowed?

The maximum number to cascade retimers in a link is 2, which is defined in PCIe specification.

Get a Detailed Explanation on the PCI-SIG blog >

If equalization can be bypassed in Retimers in PCIe 5.0 architecture, how would an Endpoint (EP) detect if there is a Retimer present?

Even when equalization is bypassed, a Retimer will still assert the Retimer Present bit (TS2 symbol 5, bit 4) in 2.5 GT/s data rate so that the Root Complex and EP can learn that a Retimer is present in the link.

Are there special considerations during link training to avoid timeouts when using Retimers?

There are no “special” considerations. During Equalization, the Retimer’s upstream pseudo port (USPP) and the Endpoint will simultaneously train their receivers, with a total time of 24ms to do this. The will also happen with the downstream pseudo port (DSPP) and the root complex. The timeouts are the same regardless of whether a Retimer is present or not.

Is a Retimer essentially a two-port PCIe packet switch?

Not quite, each port of a packet switch has a full PCIe protocol stack:
Physical Layer, Data Link Layer, and Transaction Layer.

The only notable differences are:

Other than keeping the same throughput, is a Retimer required to support different link widths for its upstream/downstream ports?

Why is a Redriver not recommended for the PCIe 5.0 and PCIe 4.0 Specifications?

Redrivers are not defined or specified within the PCIe Base Specification, so there are no formal guidelines for using a Redriver versus using a Retimer. This topic is covered in more detail in this article:

Do you suggest putting the Retimer close to the receiver?

A Retimer’s transmitters and receivers, on both pseudo ports, must meet the PCIe Base Specifications. This means that a Retimer can support the full channel budget (nominally 36 dB at 16 GHz) on both sides — before and after the Retimer. Calculating the insertion loss (IL) budget should be done separately for each side of the Retimer, and channel compliance should be performed for each side as well, just as you would do for a Retimer-less Root-Complex-to-Endpoint link.

Redrivers and Retimers are active components which impact the data stream: their package imposes signal attenuation, their active circuits apply boost, and (in the case of Retimers) clock and data recovery. As such, there is no way to truly disable these components and still have data pass through. When disabled, no data will pass through a Redriver or Retimer.

How to decide between enhanced PCB material or Retimers to solve signal integrity issues?

How to define evaluation criteria?

Bit error rate (BER) is the ultimate gauge of link performance, but an accurate measure of BER is not possible in relatively short, multi-million-bit simulations.

Instead, this analysis suggests the following pass/fail criteria, which consist of two rules:

How to execute and analyze results?

Have more questions about general topics, such as PCIe 5.0, ordering, quality, etc.? See the full list of FAQs.

PCIe Retimers to the Rescue

Get Interop Testing That's Optimized for Your PCIe and CXL Designs

Aries Smart Retimers are rigorously tested with all major root complexes and an ever-increasing range of PCIe / CXL endpoints to ensure seamless interoperation and low-risk designs. Each device is put through our exhaustive testing regime that uses the latest systems from Intel and AMD to exercise the PCIe / CXL link to the target endpoint with a battery of tests over thousands of iterations.

Rapidly develop, achieve signal integrity peace of mind and avoid wondering if your PCIe 4.0, PCIe 5.0 or CXL technology-based design will work. Our services include:

Contact us for more information about our design and testing services >